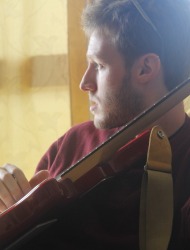 He has received various prizes and grants, including the Gina Shapira award in Cultural Studies and the Vital-Capital scholarship. Yair Hashachar completed his MA thesis in the framework of APARTHEID-STOPS, entitled “Miriam Makeba in Guinea—Deterritorializing History through Music.” As an PhD researcher, he is currently investigating the itineraries of South African jazz musicians, particularly in the context of African decolonization and pan-Africanism. His doctoral research deals with contemporary forms of "musical pan-Africanism" and their relation to earlier forms of pan-African cultural formations. Yair is also a musician specializing in jazz and West African music.