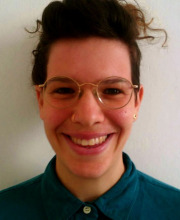 Tiferet Bassel was born to American immigrants to Israel. She was raised in Jerusalem and currently resides in the city of Jaffa. She is a graduate student in the program of Cultural Studies at the Hebrew University of Jerusalem.

In 2013, Tiferet Bassel earned a BA in Eastern Asian and Interdisciplinary studies from Tel Aviv University. Her research interests pivot on conflicting narratives of world history, particularly with regard to forms of colonialism, as well as the profound repercussions of these narratives at the levels of consciousness and material influence. As an MA researcher on the team of APARTHEID-STOPS, she is engaged with the circulation of texts of expressive culture between apartheid South Africa and India.