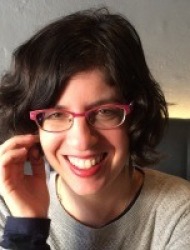 Dr. Tal Zalmanovich, a postdoctoral researcher in APARTHEID-STOPS, is a historian of Modern Britain with expertise in media and technology in the post-1945 era.

She was awarded a PhD from Rutgers University in 2013. Her current research in the framework of the project examines how the lives and activism of exiled South African political dissidents as well as of British anti-apartheid activists circulated within British culture and impacted on race relations in Britain in the second half of the 20th century. A second project looks into the rhetorical and political function of narratives of interracial love published during the apartheid and post-apartheid era. Prior to her academic career she was a journalist and is now a podcast host at the New Books Network.